Understanding Gender Equality Part I: “This Woman is a MF Boss!”

The image of California state assemblywoman Buffy Wicks voting while holding her newborn last month seemed destined to go viral. That slightly harried-looking working mom, that one-month-old swaddled in a color-coordinated striped blanket – it was perfect clickbait. And in case you missed it, on August 31st Assemblywoman Wicks was voting late at night with a nursing baby in her arms because there were no provisions for proxy voting during maternity leave. 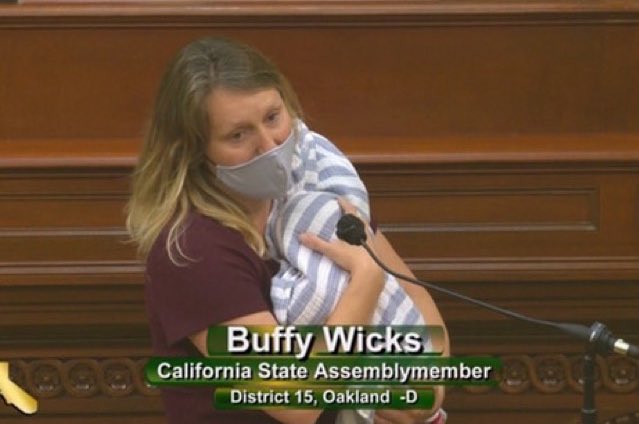 Many news outlets and social media posts rightly chastised the California legislature for such rules, tsk-tsking them for not being able to figure out a better solution. Others cataloged the challenges that led to this state of affairs and the details of motherhood: Wicks’ hour-long drive, the BabyBjorn, the newborn paraphernalia.

But what disturbed me most were the number of posts and articles accompanied by celebratory, empowering statements, all trumpeting Wicks’ accomplishment:

“They Should Know Better than to Mess with a Mama!” and, of course,

I can’t begin to express my dismay at this misguided applause for another woman seeming to “do it all.” It’s as if her “success” reassures us that women are indeed progressing, moving forward, advancing toward the equality and recognition and respect we’ve long been denied.

No. Just no. Celebrating extreme examples of Leaning In are not getting us to gender equality. They have not and will not. And worse, they send the exact wrong message. Such praise perpetuates the notion that women should continue to damn near kill themselves to fit into existing institutions not built for them. By doing this, we are missing opportunities to educate people about what does need to change.

We need to focus, consistently and exclusively, on the laws and practices that disadvantage women and how those laws and practices can be changed. We need to focus on systemic change – not on elevating totemic women. As long as we reinforce, directly or indirectly, the idea that what we need are more valiant, do-it-all, empowered women, the longer we will misguide ourselves about the root causes of gender inequality.

Gender inequality is caused by a system of laws, rules, social practices, and beliefs that were created by men for men. These systems were never designed to work for women. Often, they are expressly designed to be inhospitable for women. Empowering and celebrating women who somehow persevere in these systems misses the mark.

Absent structural, systemic change – changing laws, rules, social practices, and beliefs – it is not possible to have equality. Occasional individual women who manage to perform herculean, multi-tasking, self-sapping roles in male institutions merely illustrate the futility of it all. Moreover, it takes the blame off the men who now, today, are in positions of power to change these systems.

Ms. Wicks herself explained the problem. When asked why the Speaker required her presence, “He basically said that maternity leave doesn’t fall within the parameters of the bill that passed to set up voting by proxy.” (1)

Excuse me? Of course, maternity leave isn’t covered! Why would a state legislative body set up by and for men have rules and hours that accounts for mothers?  More significantly, apparently neither the Speaker nor any other rule-making officials in the State of California seemed to think this could be changed. (For the record, Ms. Wicks diplomatically provided cover for the Speaker: “I honestly think that he wanted to make it work — he’s a compassionate person who cares.”)

The Speaker has subsequently apologized, yet his apology is more of the same vague pablum we are accustomed to: “Inclusivity and electing more women into politics are core elements of our Democratic values. Nevertheless, I failed to make sure our process took into account the unique needs of our members. The Assembly needs to do better.” Unique needs?! Women are half the population, Mr. Speaker, not some newly discovered species needing research about their living habits. “The Assembly needs to do better”? So why doesn’t it? (2)

So let’s stop trying the ‘change women’ approach to gender equality. To deter sexual violence, we don’t need to chastise women for drinking too much or encourage them to go to fraternity parties with a watchful buddy. To get more women to the top of corporate hierarchies, we do not need to remind women to speak up more in meetings and find mentors within the organization. To help women in public service, we don’t need to give them time-saving tips about making school lunches the night before.

Here’s a secret, people: there is nothing about women that needs empowering. Stop drinking that Kool-Aid. Women (and, I might add, blacks, indigenous people, Latinx, and other non-white-male members of society) do not need “fixing” to permit them to “rise up” to participate equally in our companies and our legislatures. Frankly, these folks are all just fine the way they are. But our institutions and rules are in dire need of reform.

Expecting gender equality to come about on the backs of a handful of individual women is unrealistic and will be, by all estimates, pathetically slow. The sooner we start labeling the problem accurately, and stop trying to change women, the sooner we can all take on the hard work of changing the system.

This is a GREAT article. You GO Girl!

Brava, Scott! You are right on it! Applauding Ms. Wick’s act of human sacrifice is misplaced. When I read it, my immediate reaction was “Why should she have to go through that?” And you explained it nicely. Once again, the system dominated by men is why. Not including maternity leave to vote by proxy wouldn’t occur to them. They’re sleep walking. Worse, women who applaud such heroics are dozing, too.

Thank you, Scott, for keeping us on track.